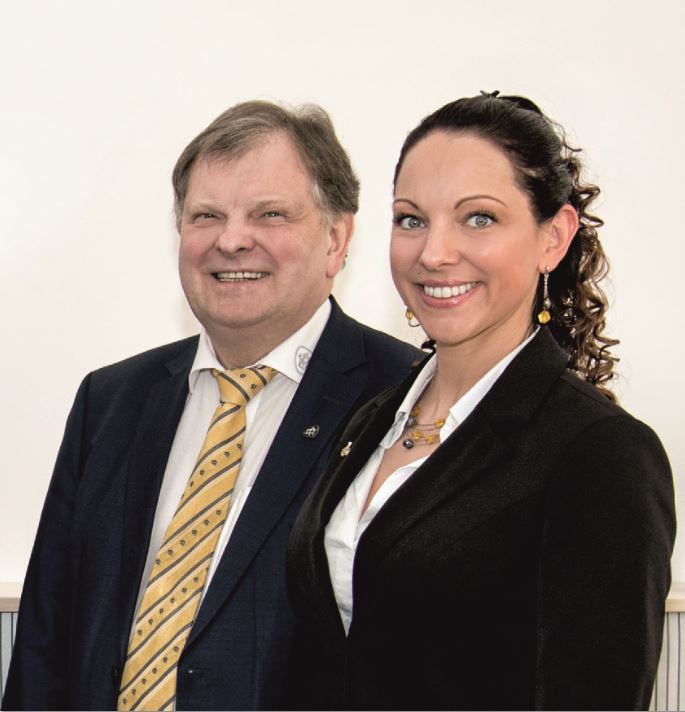 On July 1, 2020, Carletta Heinz took over the CEO function of the group from her father Carl-August Heinz and continues the family business in the 13th generation.
Carl-August Heinz managed the HEINZ-GLAS Group for 43 years and has agreed to be available as a consultant for the time being, due to the current situation.
Carl-August Heinz: “Carletta, as my daughter, as well as my successor in the company management, I wish you much luck and joy, over hopefully good and happy processes, for strength in unfortunate outcomes of plans and decisions made, happiness and courage to keep looking forward in case of setbacks.”
Carletta Heinz: “On this way and on a given occasion also here again my greatest thanks and highest respect to you, dear Dad for your achievements of the last 50 years and thus for your life’s work! I am proud to be able to follow such footsteps and will do my best to fill them and continue on our path! Thank you, also, that despite your retirement, you will continue to advise the company and I for a while. I would have really granted you a quieter pension and hope that you will be able to start and enjoy it, in full, next year at the latest!

About Carl-August Heinz
Carl-August Heinz, born in 1950, joined the family business 50 years ago and took over its management 43 years ago. In 1976, after his studies as a business graduate, he originally wanted to gain external experience with an American glass manufacturer. However, due to the unexpectedly early death of his father Adolf, he had to succeed him as sole managing director in 1977. Together with his younger brother Ludwig, he became the main shareholder. In 2003 the younger brother withdrew from the company and sold Carl-August the majority of his shares. Since then, Carl-August has been the sole head of the company and has now handed over his life’s work to his daughter Carletta Heinz.
About Carletta Heinz
Carletta Heinz, born in 1984, successfully finished her studies as a business graduate at Friedrich-Alexander-University in 2012. Besides that, she founded the project “CityHunters GmbH & Co. KG together with three classmates in 2012. She was responsible for the areas „Financial Accounting“, „Controlling“, „Taxes“ and „Payroll Accounting“ until the end of 2013. Since 2013, Carletta has been working for the HEINZ-GLAS & PLASTICS GROUP and was monitored by her father Mr. Carl-August and an external Mentor. She entered the Management as CIO in January 2017. As of July 1st, she entered the position as CEO of the group.

This website uses cookies. Those have two functions: On the one hand they are providing basic functionality for this website. On the other hand they allow us to improve our content for you by saving and analyzing anonymized user data. You can redraw your consent to using these cookies at any time. Find more information regarding cookies on our Declaración de Protección de Datos and regarding us on the Imprint.